January 4 2018. Dance Band for Old Folks who: post-secondary music students what: rhythm section plus horns and a singer when: one performance per month where: greater Vancouver area why: to lift people’s spirits and provide experience playing dance music for an appreciate audience.

I’ve finally finished the first 12 arrangements. And by “finished” I mean I’ve revised and corrected mistakes in the arrangements below, and others not found on this page.

Why not do something kind with music? I’m going to write happy arrangements for sad old people, to cheer them up and remind them of better days. Here’s an arrangement for trumpet, French horn, and trombone, to get things started. I’ve done this one in Sibelius.

The arrangement was originally written by a man who wrote a lot of arrangements back in the 40s–Johnny Warrington. A friend gave me some sheet music a few years ago (when he and his wife and child moved back to northern Alberta), and included in the collection was a Bb book of 21 “Song Gems of Yesterday,” all arranged by Johnny Warrington. I’m going to start with these Bb parts and go from there.

It would be easy to add piano, bass, drums, and a singer, should that work out. 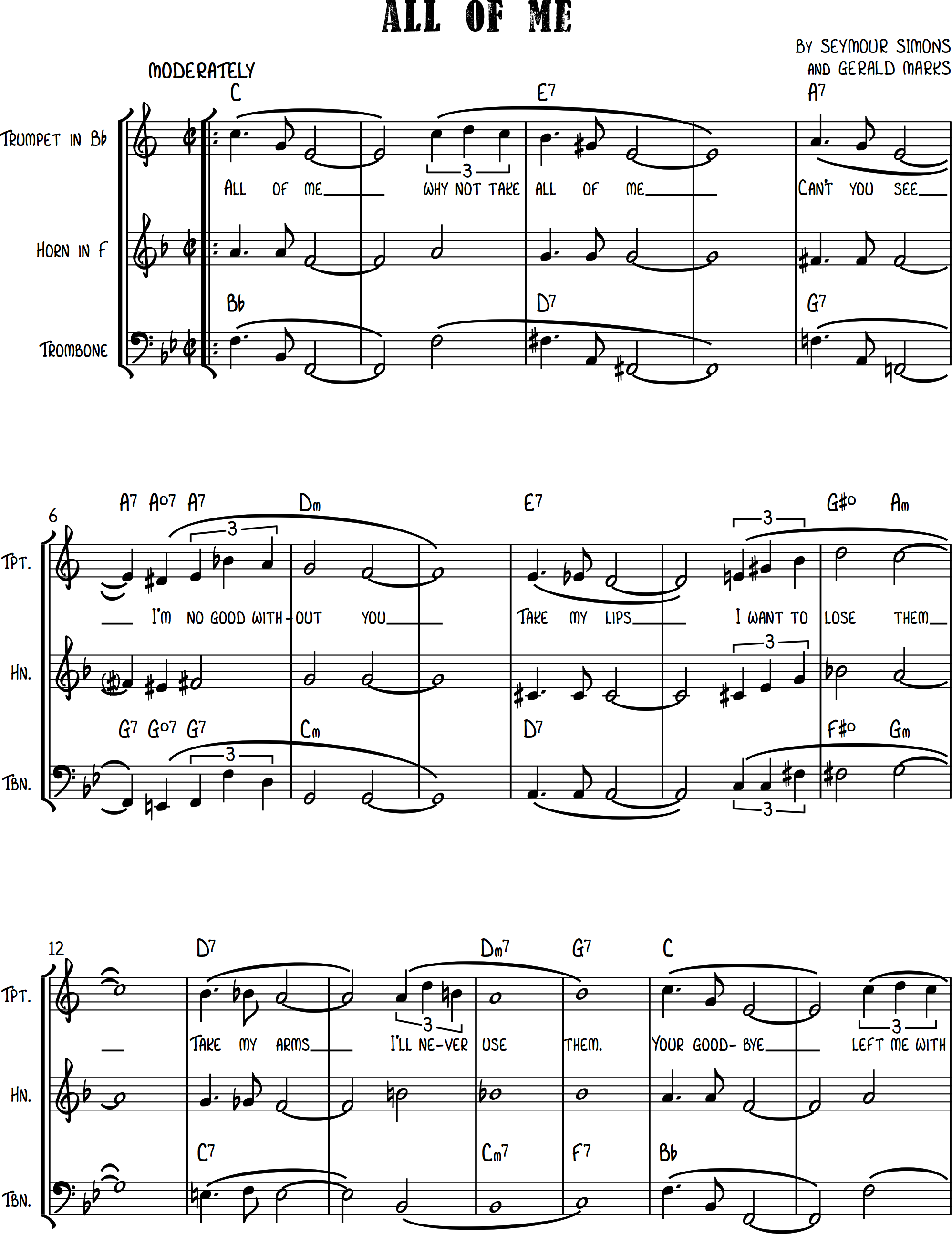 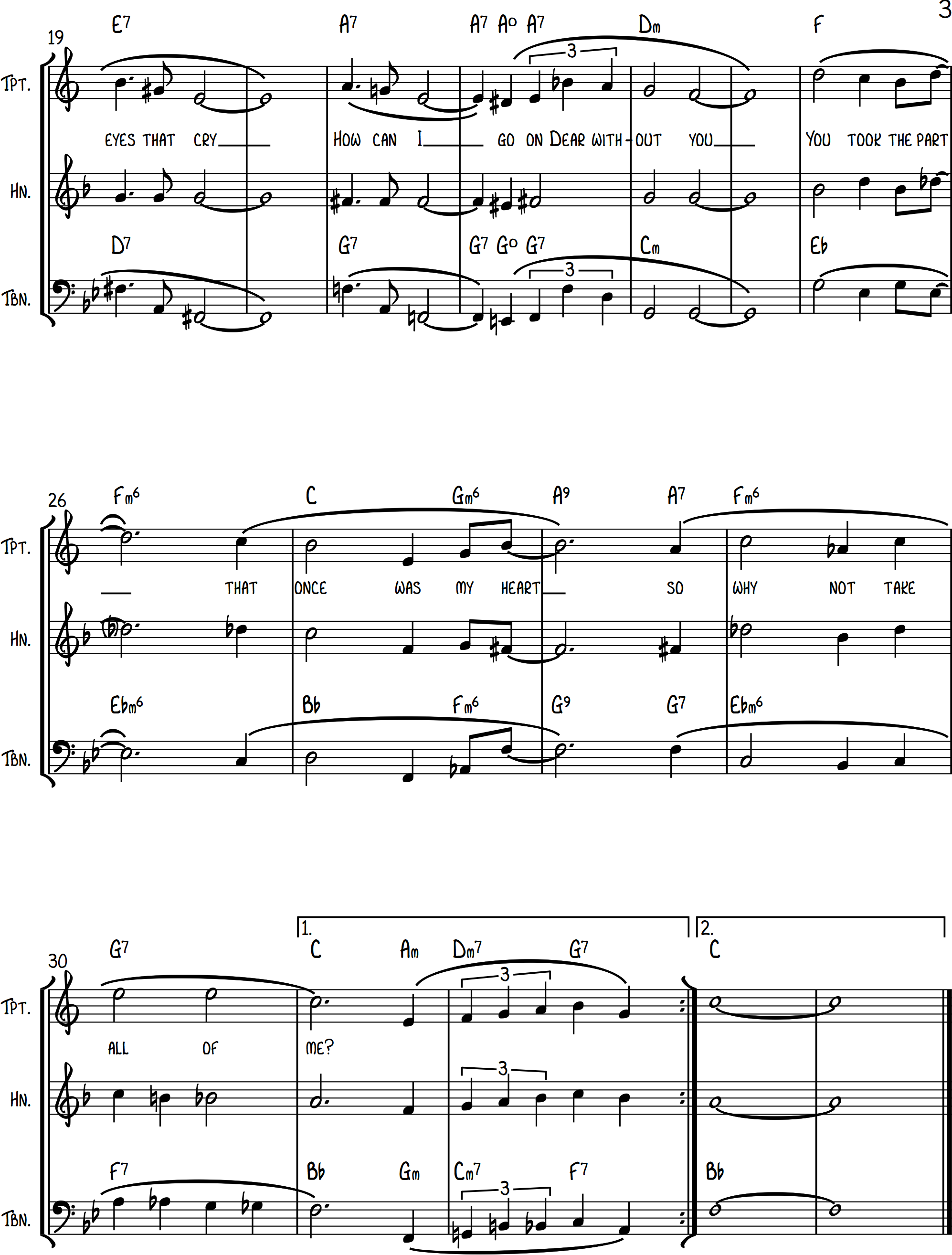 Here are four tables: When I’ve written all 14 books, I’ll link each book to a cell in the table, as a musical gift. 14 books x 21 songs: that’s 294 Sibelius files. Might take me a while. I’ll start publishing them from the Brass Trio table downwards. I’ve currently done 16 of the 21 songs (been working on this for about a month, off and on).

I’m writing full arrangements of the songs now, so I can better understand the drum and bass parts I want to write. The aesthetic, performance, and entertainment considerations I take into account will guide me and help shape those parts. For the first song in the book, ALL OF ME, I’m realizing that audience participation will be an important part of engaging the audience in a long-term care facility (aka “old folks’ home”). So in this first arrangement I’m having a horn introduction, followed by the singer singing the song’s two verses, accompanied by the rhythm section. Then, second time through, it’s brass with bass playing on 1 and 3, with drums playing ride cymbal and the singer leaving the microphone to encourage the audience to sing along.

Here’s a link to a video of the Sibelius-rendered chart.

Probably will need an overhead projector to reinforce the words. Then the singer steps back to the microphone and sings the last two phrases, with the entire band playing and the tenor sax surrounding the melody with an ad lib. 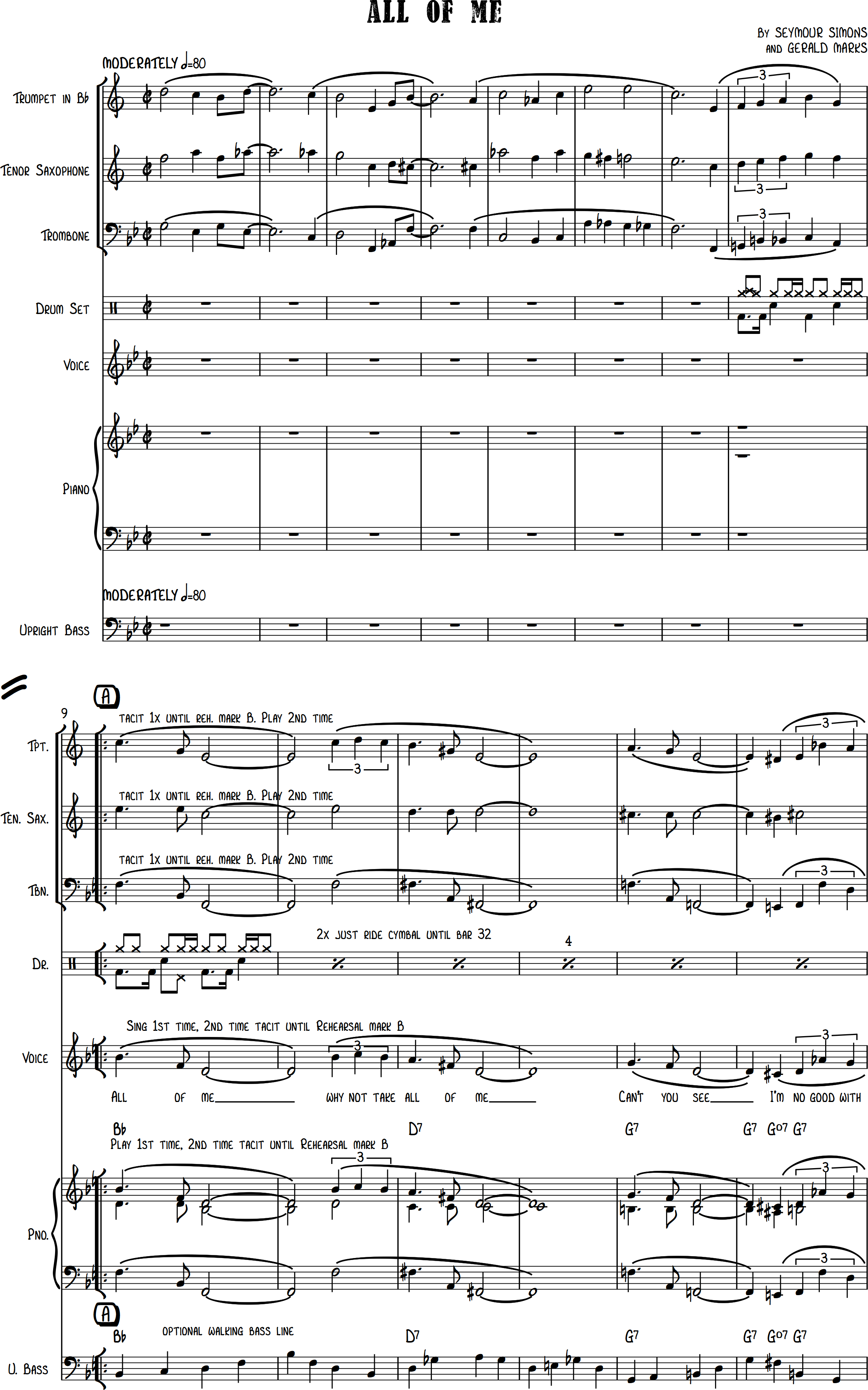 ARE YOU LONESOME TONIGHT?

Here’s the roadmap for this arrangement. Begins with an Elvis-like recitative over the two lower horns, bass and drums. When the first introduction comes, all horns play a short figure in the middle of the intro, introducing the pickup, as it were, which is played only by piano, bass, and drums, who accompany the singer throughout the song the second time it is played.

The singer sings the song the second time it is played, accompanied, as mentioned, by piano, bass and drums (horns tacit). The singer drops out at the second repeat, and all horns play that repeat, together with the bass and drums (but not piano. Piano is tacit on the pickup to the third time the song is played). Third time through it’s just the three horns plus drums until rehearsal mark B, when everyone joins in until the end.

Third time through, until Rehearsal mark B, the singer and the pianist waltz in front of the stage, returning to their positions in time to sing and play at B. Alternately the singer may choose a member from the audience as a dance partner. Also cue the disco ball during the dance sequence.

Here’s a link to a video of the chart. 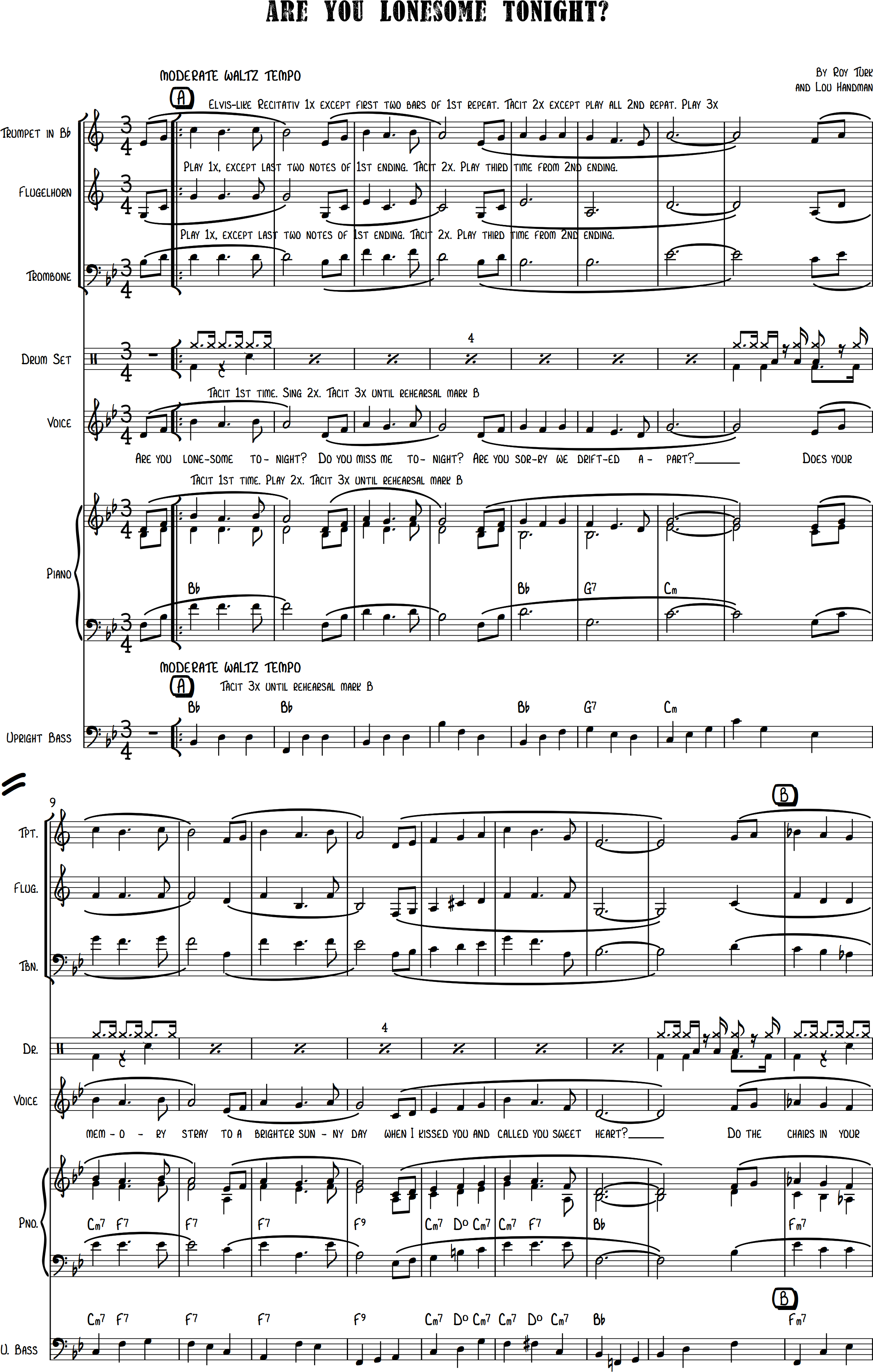 BACK IN YOUR OWN BACK YARD

Here’s the roadmap for this arrangement: It begins with the horns and the bass. The bass only plays the first quarter note in every bar until Rehearsal Mark B, at which point the bass plays every note as written. One bar after Rehearsal Mark C the drummer begins playing on the ride cymbal.

When they get to the first ending the drummer plays all of the drum part, and the singer and piano come in on the pickup to the second time through (last three notes of First Ending). Everyone plays through the second time, with the horns playing more softly, and they end together. Possibly the trumpet should play with a fibre straight mute first time.

Here’s a link to a video of the arrangement. 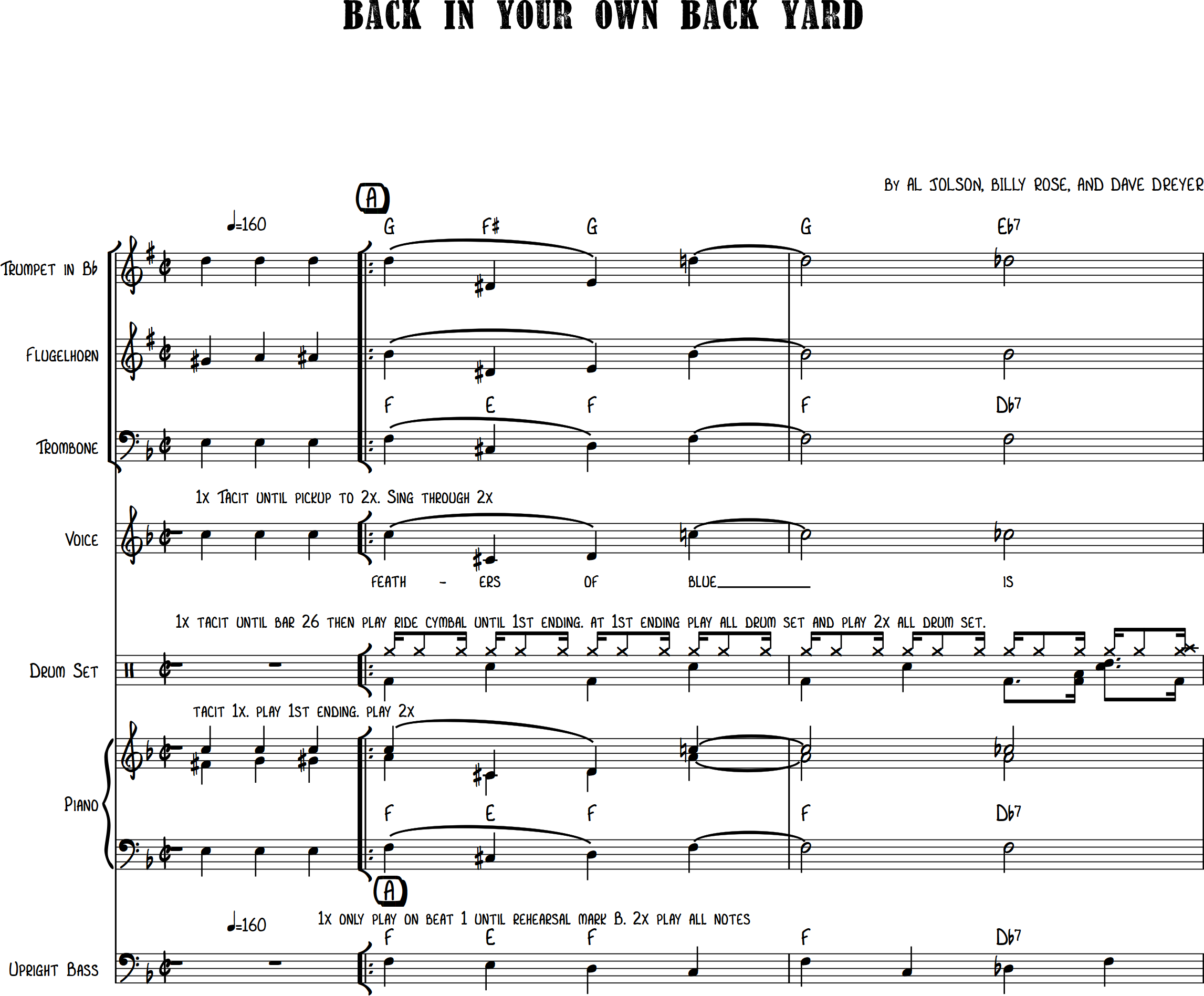 Wrote an arrangement this evening (Feb. 19 2017) for Bye Bye Blues. Here’s the roadmap: First time through it’s just singer and rhythm section. The drummer is keeping time on the ride cymbal, the pianist is comping, and the bass player is having fun surrounding the singer, who sings it sweetly. Second time through is in cut time (twice as fast) with the horns joining in. The bass line changes to a more conventional walking bass line, and the drum plays a rock straight-8s pattern. Piano plays chords as before but also doubles the horn lines in the right hand.

Here’s a link to a video of the score. 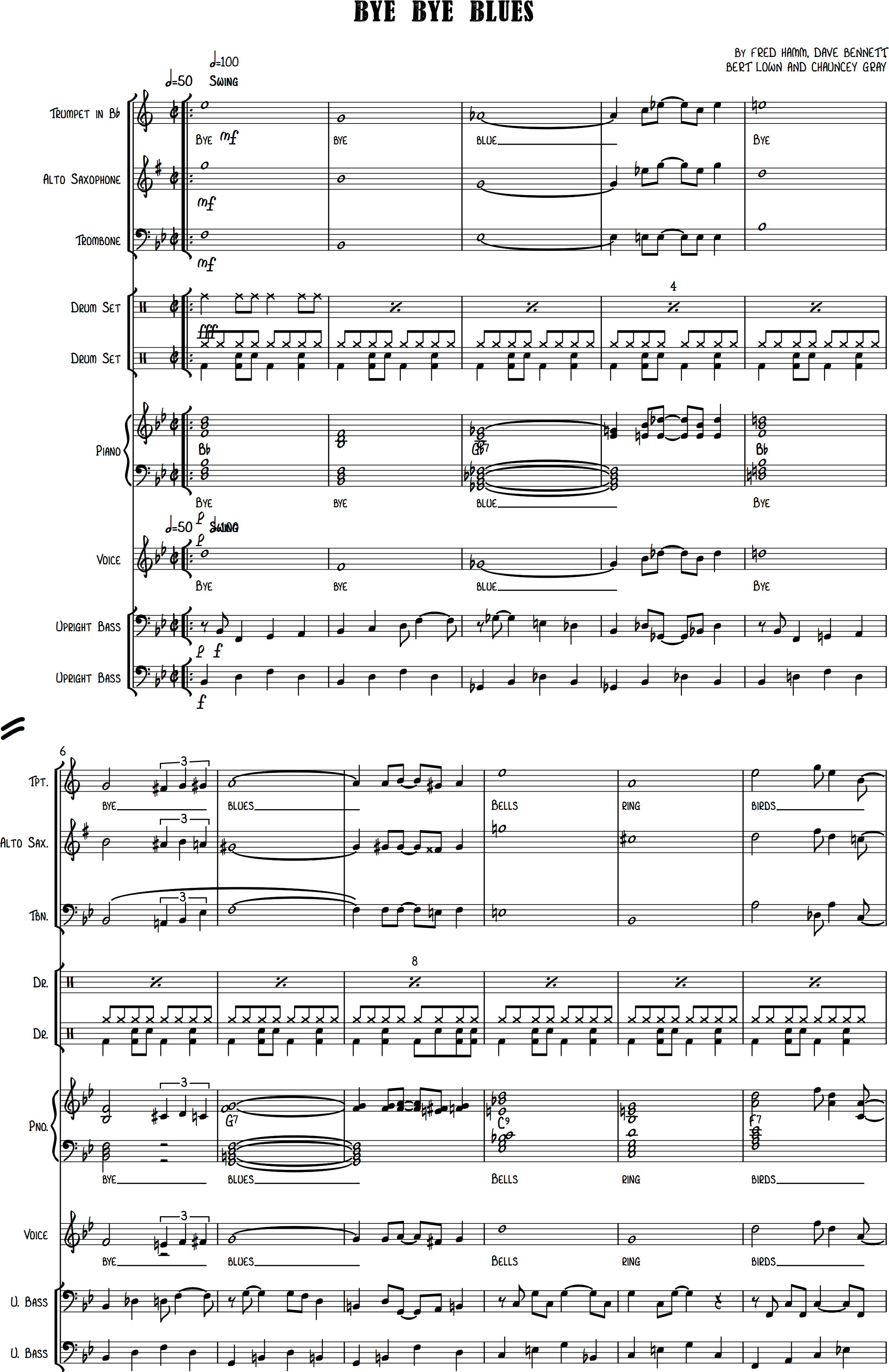 CARELESS
Here’s an arrangement I wrote last night and this morning (Feb. 21, 2017) of CARELESS. Roadmap: Introduction of horns only, using cup mutes. Letter A, entire band plays and singer sings. On repeat, singer is tacit until Coda; trumpet 1 tacit until letter B; trombone plays melody without mute and trumpet 2 improvises over top until Letter B, at which point trombone goes back to his original harmony con sord and trumpet 1 (mute out) improvises until Coda, with trumpet 2 playing melody con sord until Coda.

At Coda all horns open. Video of arrangement is here: 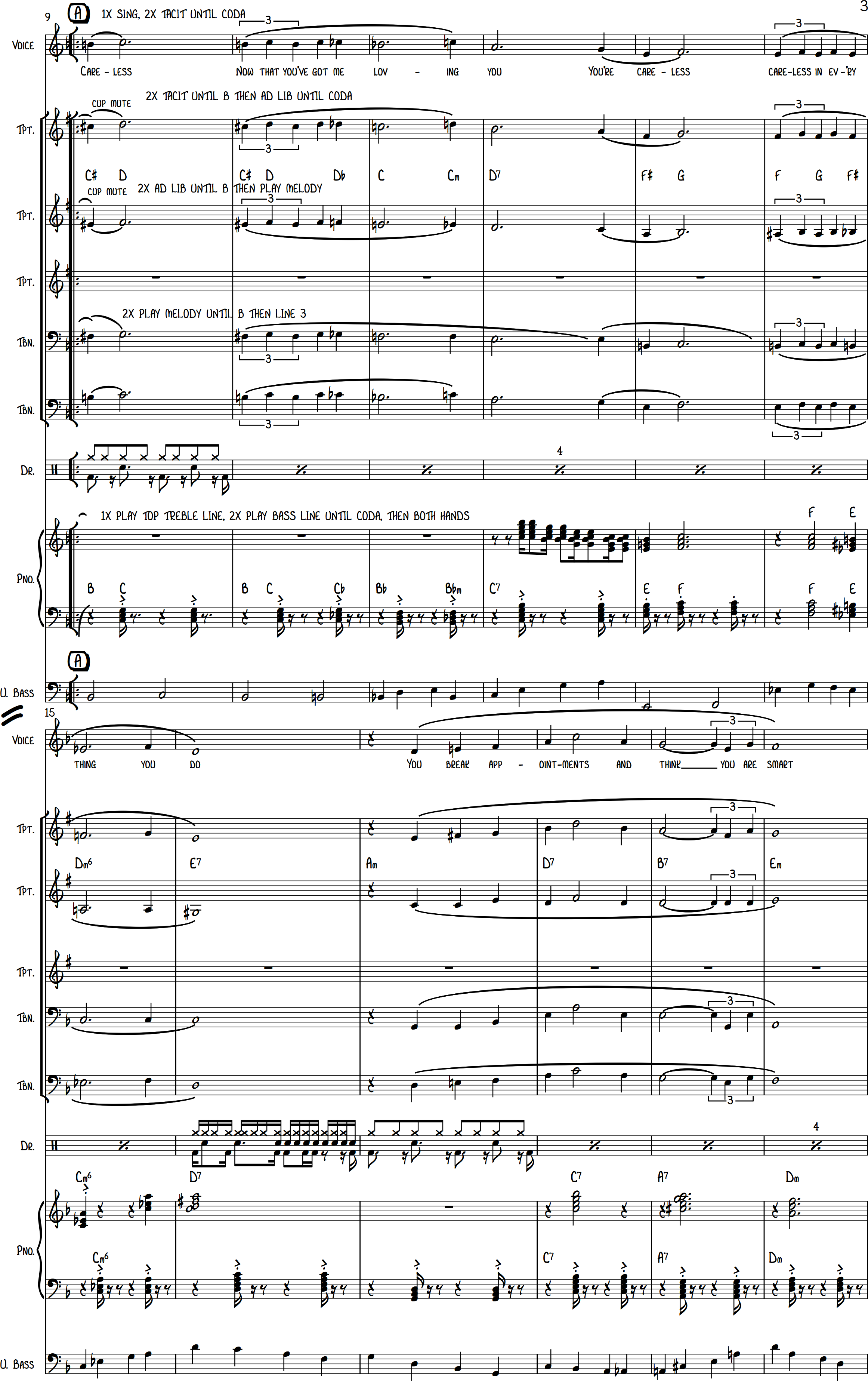 CECILIA
Roadmap: Introduction from horns first 7 bars, joined by bass and drums prior to Letter A. At letter A singer and rhythm section plays first time. First ending, horns back in and horns and rhythm section sans singer continue until letter B, at which point piano drops out for 4 bars. Piano back in at letter C. At letter D horns drop out, singer comes back in with rhythm section. Everyone except trumpet plays at letter E until F, then everyone plays until ending.

Video of arrangement is here: 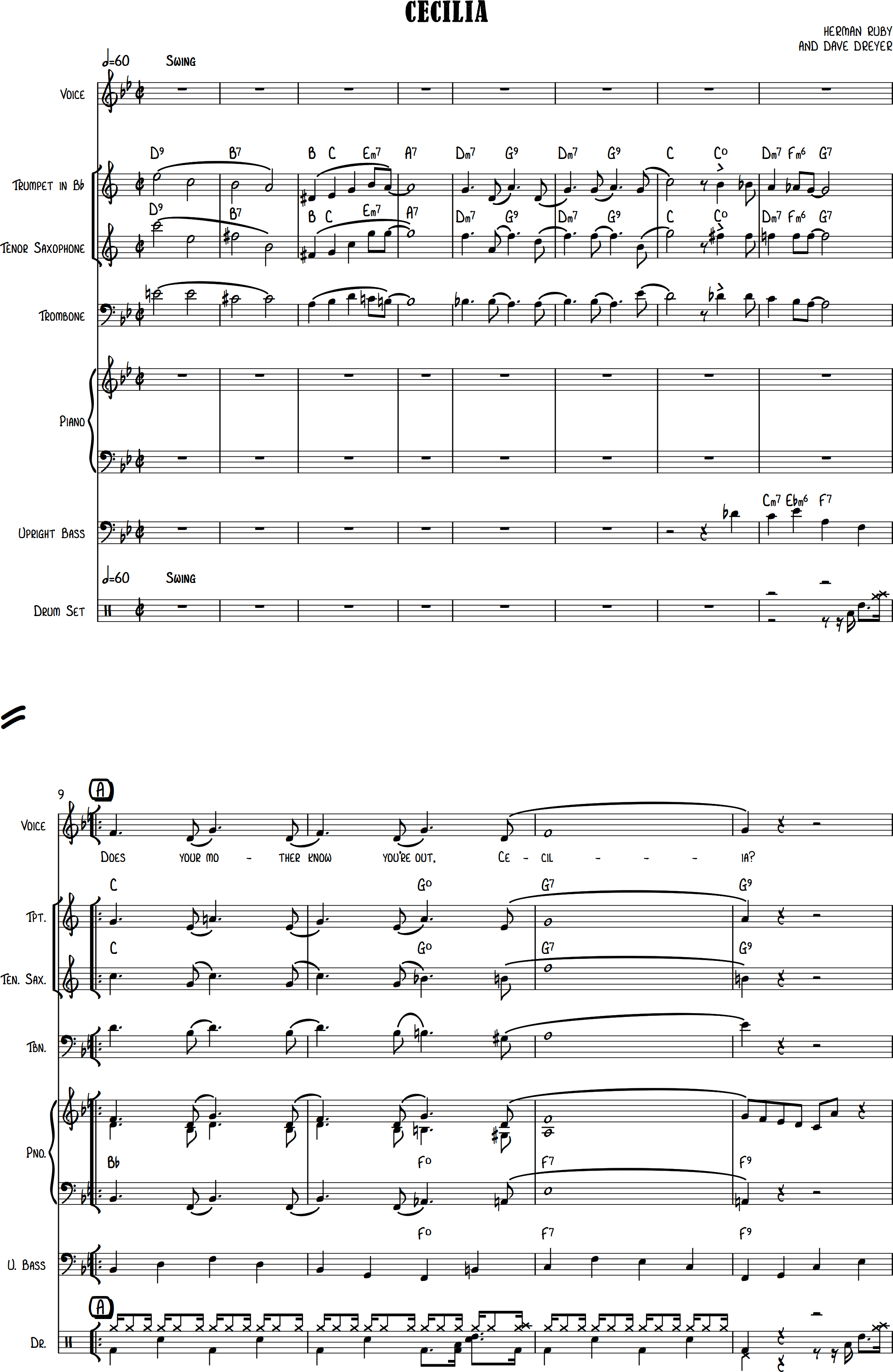 GIMME A LITTLE KISS WILL YA, HUH?
Here’s the Roadmap: it’s a very old-fashioned song, so I’ve constructed it as if it might be performed on a radio show from the 1930s. It begins with the horn section (requires a female alto or soprano trumpet player) singing the intro in three-part harmony. At letter A the Baritone singer (who must double as a trumpet player for the third time through) sings the melody accompanied by the Rhythm Section. The piano part is chording and accompanying the singer with chords in the left hand and harmony doubling the horn section’s part sans melody. The bass part is dreamy. Drums are swung and louder the first 2X than the third (3X no snare).

Here’s a video of the arrangement. 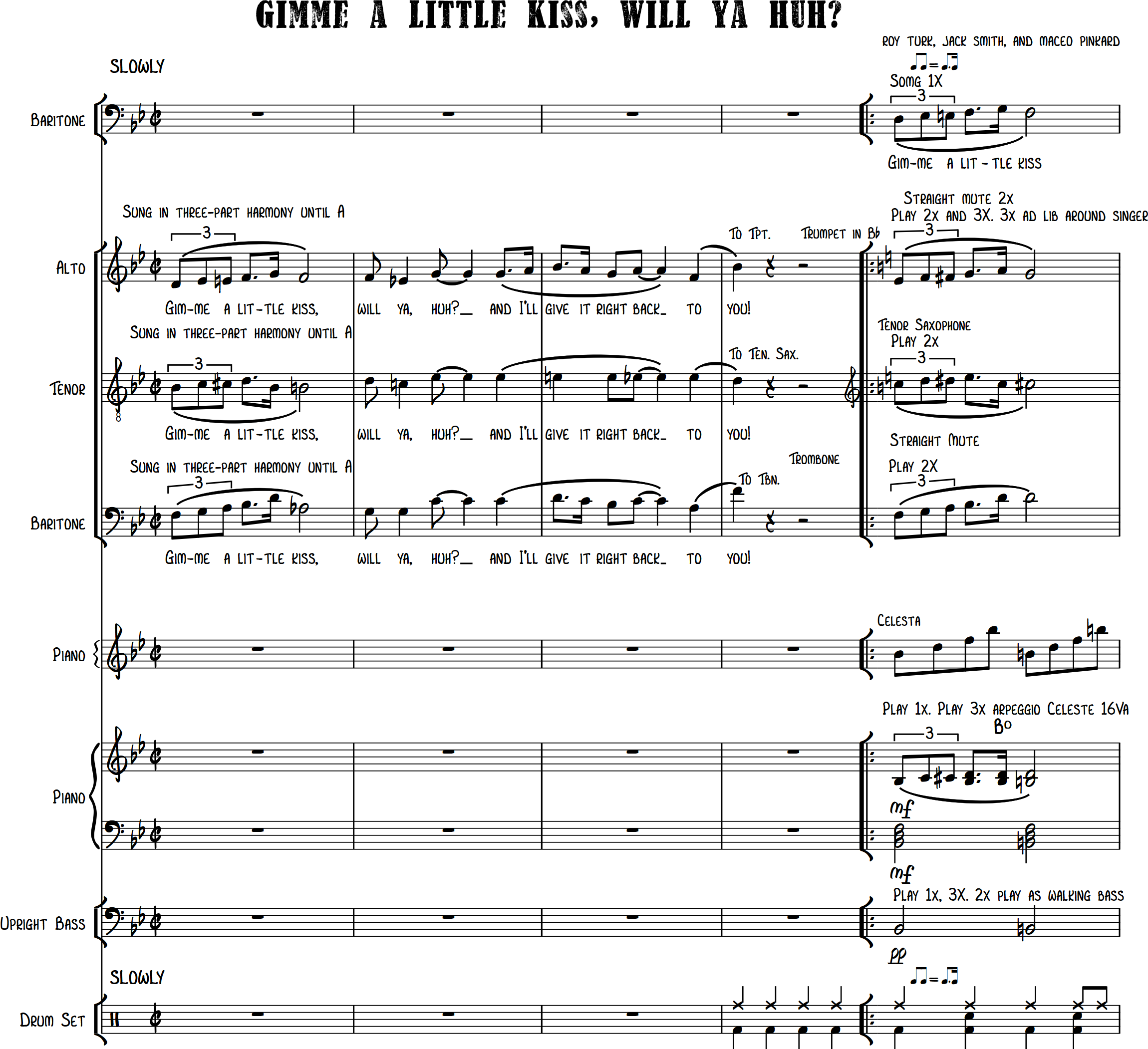